7 Signs The Universe Wants You To Slow Down

If you’re concerned with making the wrong decisions, overlooking important aspects of your life due to putting too much focus in one area or concerned with miss interpreting signs.

These 7 signs and the explanations provided will help you figure out if the universe wants you to slow down. 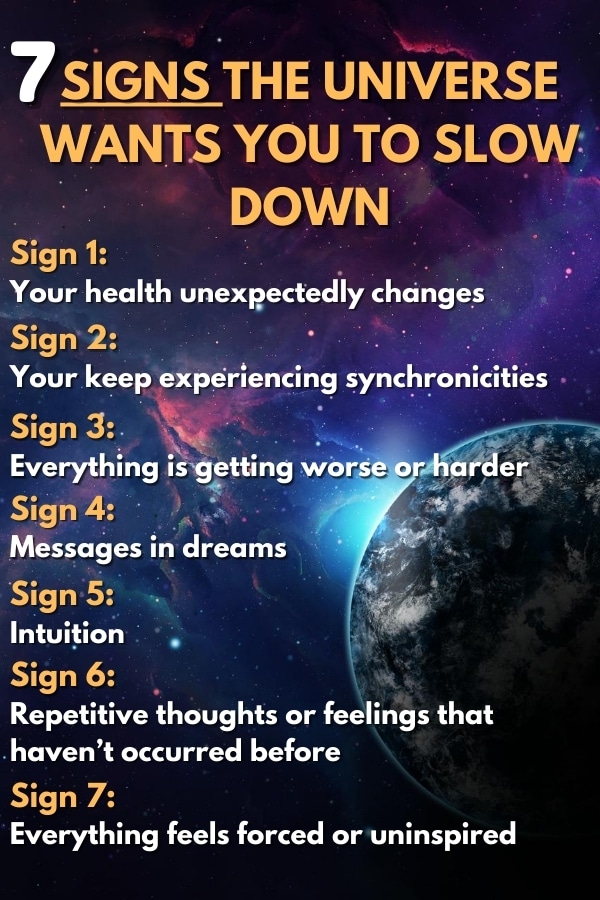 If you’re generally healthy and never had any serious health conditions or experienced long periods of feeling fatigued.
And suddenly your health begins to deteriorate it is worth considering what is the cause.

If you have been working 100+ hours per week with little sleep and a poor diet then most likely it is just your lifestyle.

But if you haven’t been working constantly with no rest and taking care of yourself. Then suddenly your health starts to deteriorate very rapidly then the cause may go beyond just your lifestyle.

This can also be linked with undiagnosed health conditions so don’t simply ignore this as just a sign from the universe and seek professional medical guidance.

This is mentioned here as your health may have started to deteriorate on a physical level due to metaphysical reasons to force you to slow down, self reflect, review what you’re doing and the impact it’s having.

Example:
You think about an old friend you haven’t spoken to in years and out of the blue for this example I'll call this friend Bob.

And another friend of yours shortly after the thought says I wonder how Bob has been doing and then later that day you bump into Bob whilst shopping.

If you have similar experiences but relevant to overworking or ignoring other aspects of your life such as your family, health, and other important areas in your life.

Then there is a good chance the universe is giving you signs to slow down.

If you notice regardless of how hard you work and try obstacles keep getting in the way.

Or things in your work or business for example randomly start breaking to the point it's almost laughable.

Then there's a good chance the universe is trying to communicate with you. This sign is however the most difficult to distinguish from something else.

Because this could also happen due to pursuing the wrong path in the first place, or this could be happening due to being tested.

However, I think it’s worth mentioning because it can also be a way of getting you to slow down.

You might receive signs or messages from the universe including spirit guides during dreams.

Whilst dreaming we are in a different state of consciousness which is easier for spirits to communicate with us.
Signs can from aspects of our unconscious minds and can also be symbolic.

Example:
You see an animal that you symbolically associate yourself to being similar to such as a lion and you see a lion that never rests and burns out. The lion then heals and becomes aware of something important due to slowing down.

Meaning no conscious reasoning has occurred to form the feeling of knowing. Many believe intuition is purely a mental process as understood by modern-day science.

I come from the view that it also comes from something beyond ourselves, a greater intelligence.
Intuition if you’re able to distinguish the feeling from other feelings including emotions that may feel similar.

Is the most accurate sign out of all 7 because it comes from a greater intelligence that is pure knowledge that hasn’t been formed due to our own biases and inaccurate perceptions.

If you have an unexplainable sense of knowing that you should slow down chances are you should.
Be careful of confusing this with a belief that is limiting your potential.

Sign 6: Repetitive thoughts or feelings that haven’t occurred before

Anything repetitive might be a coincidence but its worth consciously taking into account if a particular thought or feeling is unlike what would usually occur.

Because it could be a sign such as a repetitive song or memory from your past that symbolically represents taking it easy or slowing down for example.

You might think it's just random thoughts from your unconscious mind but that is the main channel in which the universe communicates to us through.

There is a purpose for why we are here and many people in ‘spiritual’ communities mistake working hard or putting a lot of effort into something as being out of balance or out of harmony with your purpose.

This physical experience we have during the temporary experiences of being human beings involves imbalance, because perfect harmony and balance can only exist outside of this physical reality.

The very nature of our reality is out of harmony and balance because there is no growth in harmony and we are here to learn and grow.

If you feel what you’re doing is meaningless or you don’t feel inspired even if you aren’t giving it your all.
Chances are you need to slow down and reevaluate why are you doing what you’re doing.

And whether you should redirect and take a different path that is more aligned with your purpose.

It’s worth noting alongside these signs that our minds are wired in a way that searches for more confirmation for what we believe and want to be true.

You might know on some level you should be doing the opposite of slowing down, moving faster, and working harder.
But due to having inner conflicts associated with working faster or harder in a particular area of your life or in general.

You’re at risk of reading a blog post like this and then using it as reconfirmation to look for anything that could fit into any of these signs.

To reconfirm to yourself that you should indeed slow down.

Seeing any of these signs means you should slow down...right?

The difficult aspect of writing accurate signs or giving tips on how to interpret signs is that everyone perceives their reality through their own unique model of the world.

Someone who is a workaholic and has associations they might be unconsciously aware of that makes them feel like a failure if they don’t constantly work very hard.

May read the last few paragraphs and go I knew it! This is nonsense I knew I should just keep going maybe I’m not working hard enough!

Avoid making any rash decisions for slowing down or speeding up, use these signs as a guide to self reflect because the universe will give you signs for what you truly need if you pay attention.

What if these signs mean something else entirely

It’s also worth noting that one of the reasons I’ve mention intuition is the best sign out of all 7 and to avoid making rash decisions and pay attention to the signs you’re getting.

This is because you might be experiencing many of the signs I’ve mentioned but due to another reason such as going in the wrong direction and being on the wrong path. 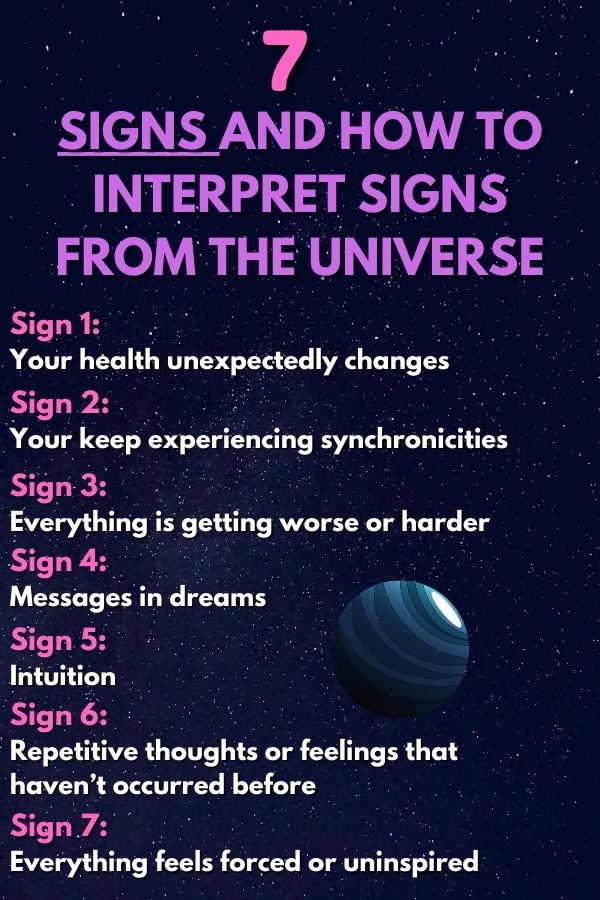 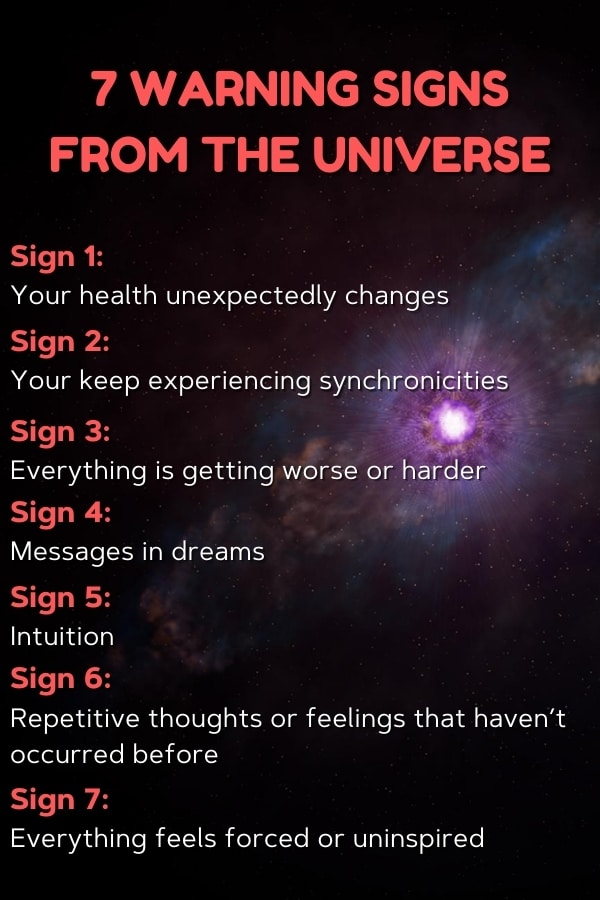 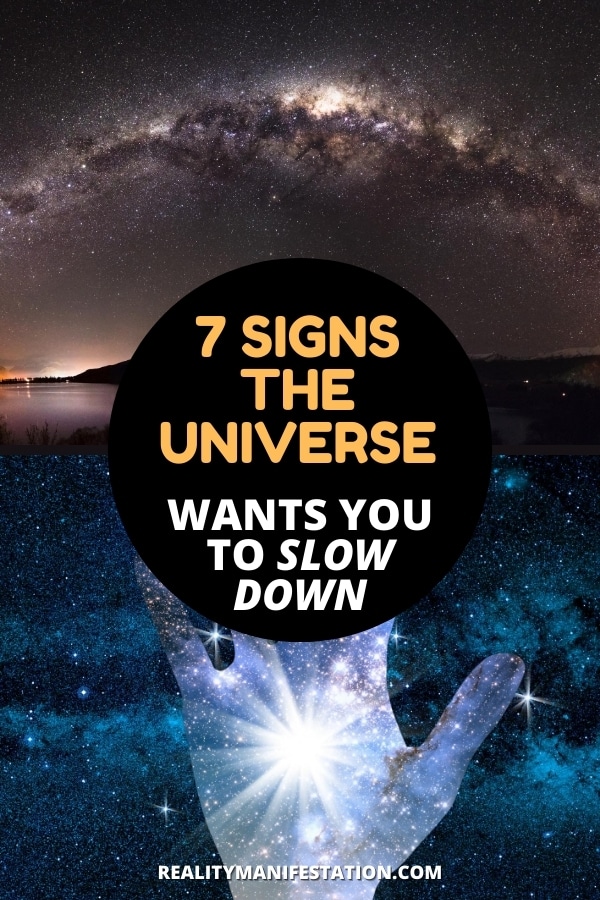 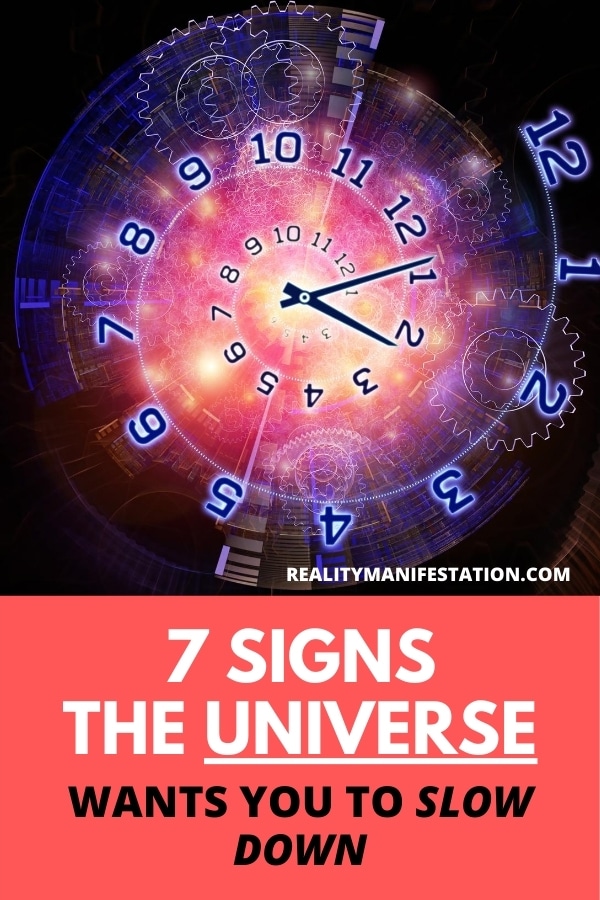 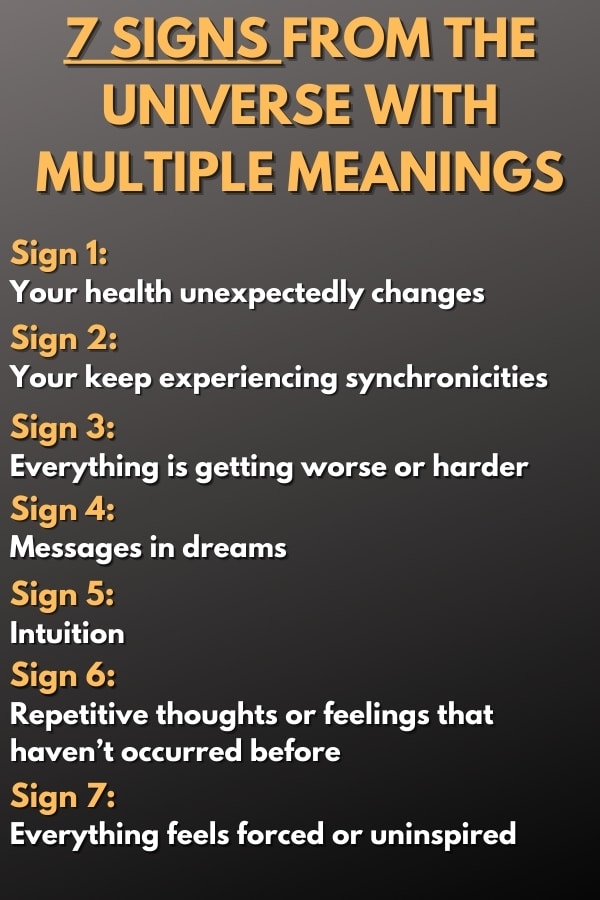