Insecurity is a lack of certainty in one’s own ability or feelings of self worth. Someone may feel very confident and certain with their ability in some areas of their life but very uncertain in others.Which creates fear as this is their minds way of trying to keep the individual away from perceived potential danger. Intuition is a feeling of unexplainable knowing but without a clear logical explanation as to why the feeling has occurred.At its basic level insecurities are beliefs that causes someone to feel uncertain about their ability or self worth.

Now that a clear explanation for intuition vs insecurity has been given continue reading if you’re interested in knowing more about what the differences are.

And how to more accurately distinguish if you’re experiencing intuition or insecurity. 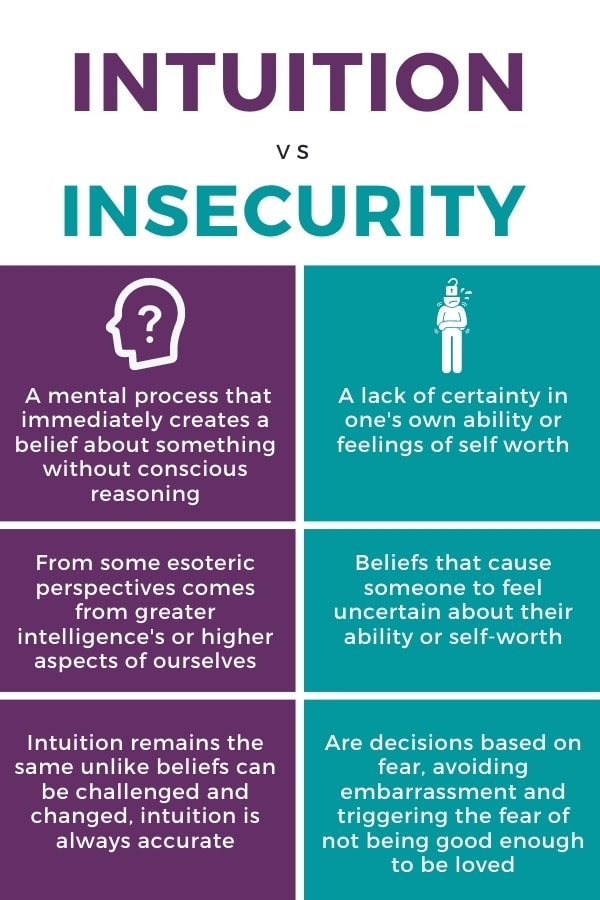 What's the difference between intuition and insecurity

Expanding upon the above definitions to make what intuition and insecurity are clearer. Insecurity is when someone feels uncertain or lacking in their self-esteem, confidence, or anything related to their feelings of self-worth.

An important word there is uncertain because a belief is just a feeling of certainty to whether something is or isn’t true. So when someone feels insecure about something or many aspects of their life.

What causes someone to feel secure or insecure

They have beliefs that cause them to feel certain that they won’t be good enough which on a deeper level is associated with the fear of not being good enough to be loved.

This is why there are people who are very untalented/unskilled and haven’t achieved much in comparison to what most people would relate to being successful and but they feel very secure within themselves.

Then some people feel extremely insecure (and the important word is feel, because it’s based on a feeling, not logic or what is true in reality) even though they have achieved a lot and would be considered by most people very successful.

This is because they have feelings (beliefs, a belief is a feeling of certainty) that how they perceive themselves in a given area or overall how they view themselves is inadequate to be good enough or worthy of being loved.

What is intuition definitions and explanations

One of my favourite definitions and explanations for what intuition from a modern-day science and psychology perspective even though I have a different opinion on it is from an article by the NCBI.

The article describes intuition as a mental process that has been formed as a belief immediately without any awareness of a reasoning process at work.

So according to this information...

Definition for intuition: Intuition is an immediately formed belief that creates a feeling of knowing or a gut feeling that hasn’t been formed by conscious reasoning.

My view differs greatly in that I believe intuition comes from intelligences greater than ourselves that comes as a true insight/knowledge that isn’t based on feelings or a belief.

How to tell the difference between intuition and insecurity

Being able to tell the difference between intuition and insecurity is much easier than it is for intuition vs emotions.

Because emotions can create a series of sensations and feelings that can feel very similar to intuition.

Insecurities however are always based in fear of not being good enough and intuition never feels even remotely close to fear or inadequacy.

Why can intuition create feelings of fear or insecurity

As mentioned above intuition comes as a feeling of unexplainable knowing that will only cause fear due to feeling uncertain whether the feeling of knowing is accurate or not.

The feeling of knowing itself from intuition however is never fear-based, only someone’s response and interpretation of what might go wrong is.

Is my Cheating intuition accurate or is it insecurity

To both answer a common question and to help further explain with some examples of how intuition differs from insecurity.

In the context of relationships, it's easy because a lot of insecurities people have are often triggered in intimate relationships.

If you’re generally secure in yourself and are unlikely to feel jealous or distrust your partner but all of a sudden you have a deep gut feeling of knowing something is wrong.

Then it is highly likely that it is intuition and worth investigating. I would also caution not to jump to conclusions and make rash decisions because our own biases can make it difficult to truly know if something is or isn’t intuition.

How to tell if insecurity is clouding your judgement

Unlike the above example if you’re generally insecure especially in relationships.

And have had doubts about whether your partner is or isn’t someone who is generally faithful and wants to be or remain committed to you.

If you’re regularly feeling anxious and distrust in the relationship chances are unless there are clear logical reasons as to why such as finding your partner flirting with people and trying to hide it from you.

Then most likely it is insecurity, to make this simple unless it is a sense of knowing that doesn’t cause feelings of fear, anxiety, self-doubt or inadequacy it isn’t intuition.

Signs for Insecurity vs gut feeling - Is it jealousy or intuition

The following are signs and examples for if you're experiencing insecurity or intuition.

To be able to know whether you’re experiencing intuition or insecurity you need to start trusting and believing in yourself. Even if you currently have a lot of perceived inadequacies that cause you to feel insecure.

If comes as an unexplainable sense of knowing, practice following these feelings.

Over time you will get better and increase your faith in your intuition and your ability to follow it.

I hope you have found this post useful let me know in the comments below what your experiences with intuition are or if you have any questions. 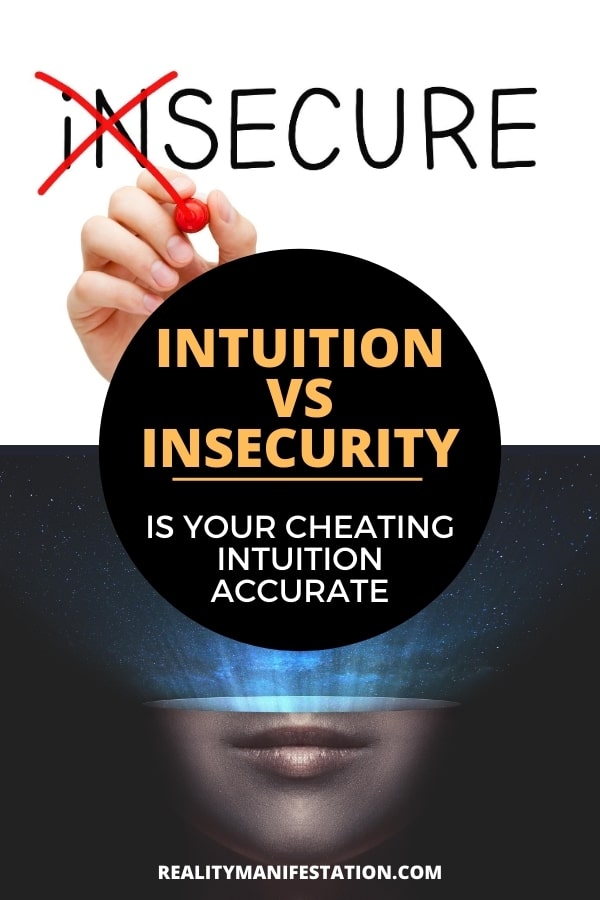 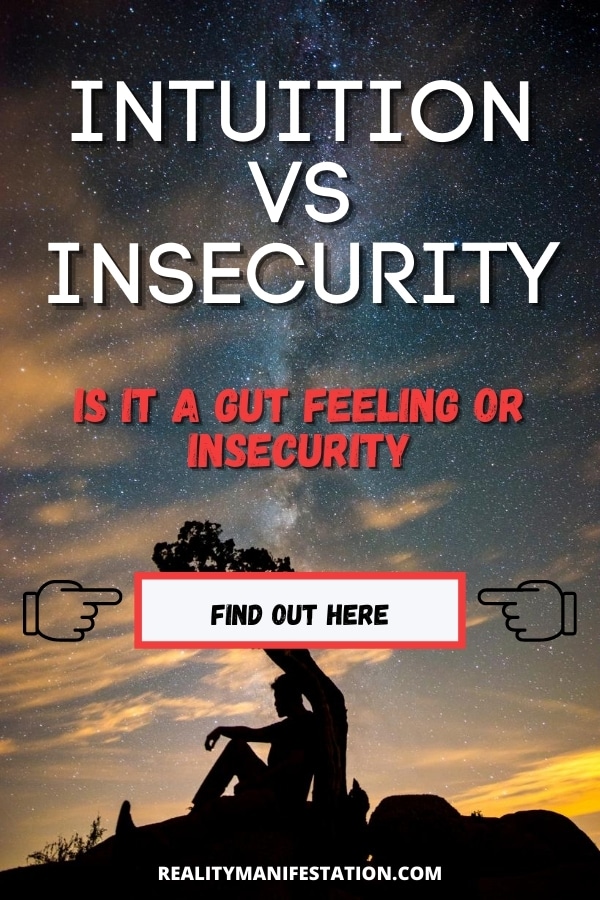 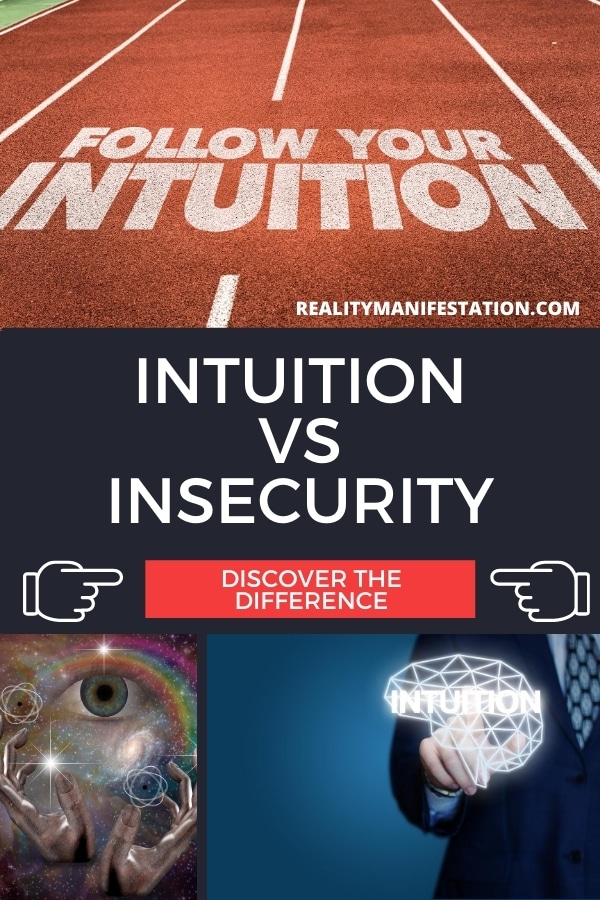 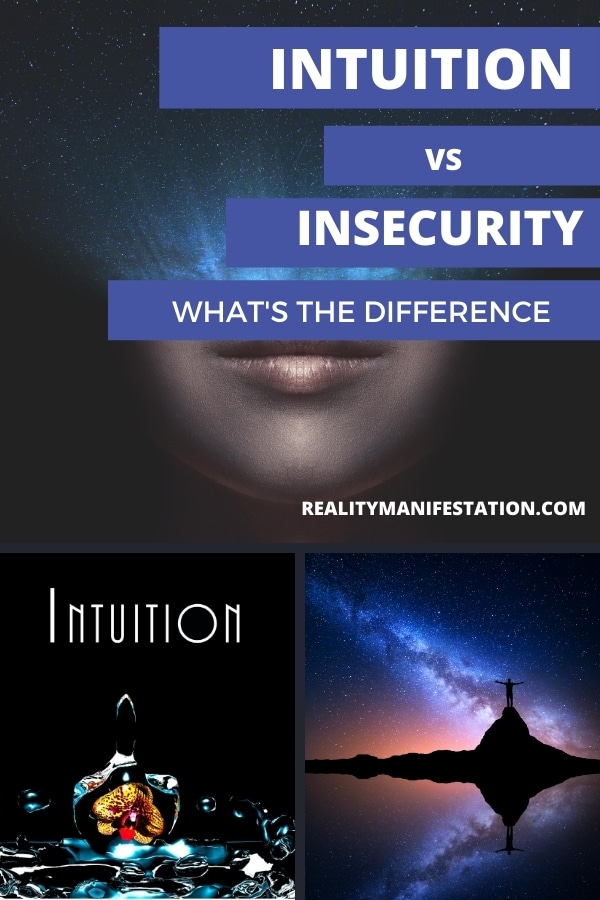