Zen Meditation Why It's Unique And How To Do It Yourself

Zen meditation, originally known as Zazen which means “seated meditation” is an ancient practice and is the foundation of Zen Buddhism.

Gautama Buddha became enlightened through the practise of Zazen which differs from a mindfulness practice as it can be described as a mental exercise that keeps the body still and in place.

In this article you will learn the foundations of forming your own Zen meditation (Zazen) practice including the correct positioning, posture, breathing, areas of focus, location, equipment,

and what separates Zazen from other mindfulness and meditation practices including how to continuously progress in your practice of Zazen.

The foundations of a Zen meditation (Zazen)

Zen meditation more accurately called Zazen originates from the teachings of the Buddha who lived in India over 2500 years ago. Which were later brought to Chinese Buddhism and then later in Japan.

What separates Zazen from most other meditation/mindfulness practices?

The main differences between Zazen and a regular meditative practice that usually involves just sitting and becoming mindful are:

- There is an enthuses on having a specific posture including the position of your arms, hands legs and head.

- There are specifics on how to breathe during Zazen that help connect the body and mind whilst also silencing it.

- Zazen isn’t for silencing the mind but rather becoming aware of our true nature, the truth of life and death and that we already are which we seek.

- In Zazen the eyes are kept slightly open rather than closed.

What you should strive for whilst practising Zazen

The tradition of Zen Buddhism in Japan founded by Zen Master Dogen Zenji states that you should just simply sit without any expectation.

And to throw ourselves into it without expecting any reward it is the desire of the ego to achieve enlightenment.

Many people go into Zen or various spiritual practices to discover the truth or to find an answer to a problem which is called the way seeking mind.

Which is important for someone to begin Zazen in the first place but paradoxically can stop someone from finding the truth or the answer to which they seek.

Postures and positioning in Zazen

I recommend watching the instructional video below as it is important to get your posture and various positions correctly which is much easier to see demonstrated visually rather than instructed through text.

Expanding on the above video when going into the full lotus position you want to make sure your foot is high up on your thighs or on your calves if you’re lacking the flexibility.

If you can’t manage the full lotus position do the half or quarter lotus position again aiming to place your foot for high up on your thigh or on your calf if you’re lacking the flexibility.

If you feel pain in your knees don’t force yourself through the pain as the knees can’t be stretched like the muscles on the thighs which will only cause injury.

If your flexibility isn’t great don’t worry as long as you’re in one of the positions within the video including Burmese or seated on a chair and are stable you can still do Zazen.

Your back and head should be straight with your chin tucked in also with the tongue placed lightly on the upper palate which will prevent you from salivating.

Eyes are lowered slightly closed looking only 2-3 ft in front of you.

The positioning of our bodies greatly affects our state which includes how we think and feel. The reason why we sit in Zazen is that it keeps us still.

The reason we sit in a pyramid like position whilst being raised by ideally a Zafu or something similar as it tilts our weight forward which helps keep the back straight and creates more stability.

This also opens up the diaphragm which makes it easier to take deeper breaths. We place our hands in what’s called a cosmic mudra (as shown in the image below) which makes us turn inward. 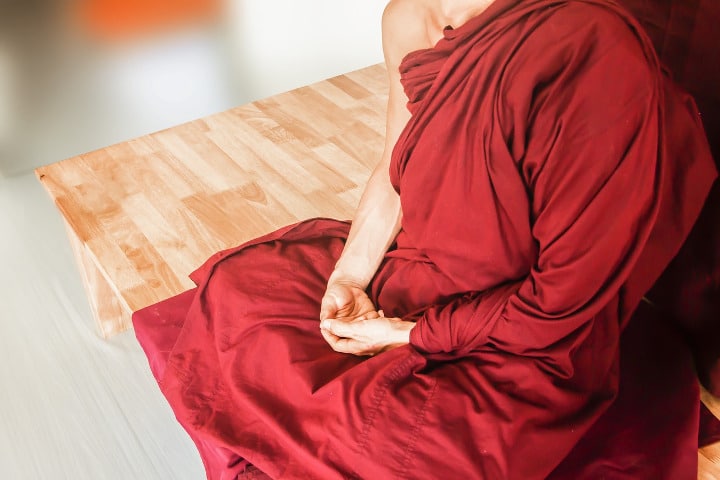 There are a variety of ways to breathe in Zazen, the most basic including more advanced breathing techniques will be covered below.

All of which involve having the mouth closed with inhaling and exhaling through the nose.

The various forms of breathing also all involve breathing into the stomach rather than expanding the chest.

Different methods/techniques for breathing during Zazen

- Naturally breathing without any enthuses on the duration.

- Counting breaths with counting both the inhale and exhale as a single count. Once you have reached 10 reset and start again and keep repeating this process this is good for beginners to have something to focus on.

Whilst doing this focus on pulling in your navel on the inhale and naturally allow your navel and diaphragm to expand out on the exhale.

Where to place your focus during Zazen

A Useful place to put your attention is what’s called the Hara which is 2-3 fingers below the navel (your belly button). Which is believed to be both the physical and spiritual centre of the body.

As you’re breathing imagine your breath is going down to the Hara and coming back out from the Hara.

You can also keep your focus on the breath and counting as mentioned above.

You want to be in a quiet room free from distractions, with moderate lighting that is neither considered to be dark or bright. With a comfortable room temperature that has a clear wall you can face sitting 2-3 ft away from.

By being sat facing a wall it’s easier to avoid being distracted without the temptation of closing your eyes as this is more like to create visual images and to put you into a sleepy state.

How long should you do Zazen for?

For beginners 5-10 minutes is a good starting point whilst increasing with gradual intervals of 2-3 minutes on a weekly basis depending on your dedication and level of progress.

Avoid becoming frustrated and disappointed if you have periods of feeling like you aren’t progressing or even regressing as progression especially in Zazen isn’t always linear.

Most of what you’ll do in Zen is on your own without a teacher and by learning what is already from within.

how to do a zen meditation (zazen) in 3 simple steps 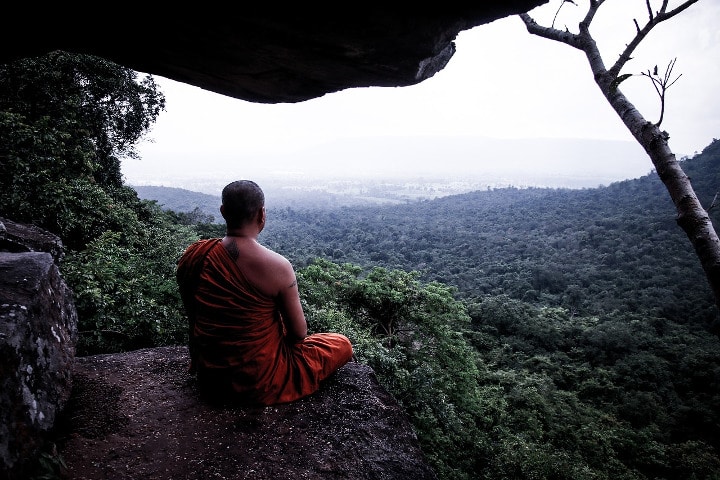 Now that we’ve gone through a basic explanation of Zazen we can now focus on practical steps to follow for your own practice.

Step #1 Have a planned time and location for Zazen

Even though Zazen can be performed anywhere or any time ideally having it planned will greatly increase the chances of it becoming a habit and you sticking to the practice.

Also have appropriate sitting equipment ready ideally a Zafu so you can sit comfortably with your hips raised in the ideal position as shown in the video above.

Ideally position yourself facing a wall or in an area free of anything that may cause a distraction.

Step 2 # Get into the correct position

Pick a position from the above video that is comfortable for you whilst remembering to:

- Keep your chin slightly tucked in.

- Back straight with a slight bend in your lower back.

- Both feet or single foot depending on the position on either your thigh or calves.

- Eyes slightly closed looking downward so you can see only 2-3ft in front of you.

- Hands in the cosmic mudra position.

- Tongue on you upper palate or pressed against the top and back of your front teeth.

- Inhaling and exhaling through the nose, with the inhale coming into the stomach and expanding the diaphragm.

- Can choose to focus on the breath and repeatedly count up to 10 with both the inhale and exhale being a single count. Then resetting back to 1 and repeating.

- Alternatively you can focus on extending the duration of both inhaling and exhaling.

- Another option is to focus on your Hara which is 2-3 fingers below the navel (your belly button).

Model for helping track and progress with your Zen practice

Even though paradoxically trying to progress and monitoring your progress in a Zen practice can actually hold you back in more advanced levels. If you’re just getting started it can be very useful.

The following video contains advanced teachings and a model that explains different levels of progression in Zen.

If you want to read some great spiritual teachings and quotes by spiritual teachers through the ages I recommend looking at Transformative Spiritual Quotes That Will Empower Your Journey.